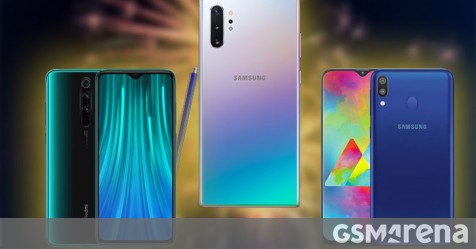 Here are the winners – the best phones of 2019 in three major categories – Flagship, Midrange, Entry-level, have been selected by you, our readers, throughout the last two weeks.

We started with a preliminary public vote where over 20 devices per category were competing to enter the final round. The Top 5 devices were sent to another vote where over 70,000 readers picked what they think the best phone is. Without further ado, here are the winners:

The latest flagship by the Korean manufacturer collected a third of the votes in the final round, leaving the OnePlus 7T Pro with its 20% of the votes far behind. The Note lineup wins the public prize for best flagship a second year in a row, after the Note9 snatched the win 12 months ago.

The Redmi Note 8 Pro’s win in the mid-range category was the most dominant of all. The phone got over half the votes in the final round – 51% of you chose the device by the Xiaomi sub-brand.

The Galaxy A70 was a very distant second, gathering only 16% of the vote.

Samsung launched the Galaxy M series to replace the J lineup and fans immediately loved the new phones, particularly the Galaxy M20, which snatched 30% of the total votes. The second place is for Huawei Y9 Prime (2019), which is quite a surprise – it was only fourth during the preliminary round, but now managed to gather 23% of your votes.

The past 12 months were filled with intriguing smartphones. We are hopeful that 2020 will be fruitful as well with announcements and new technologies in the mobile industry.